How to Collaborate With a Computer 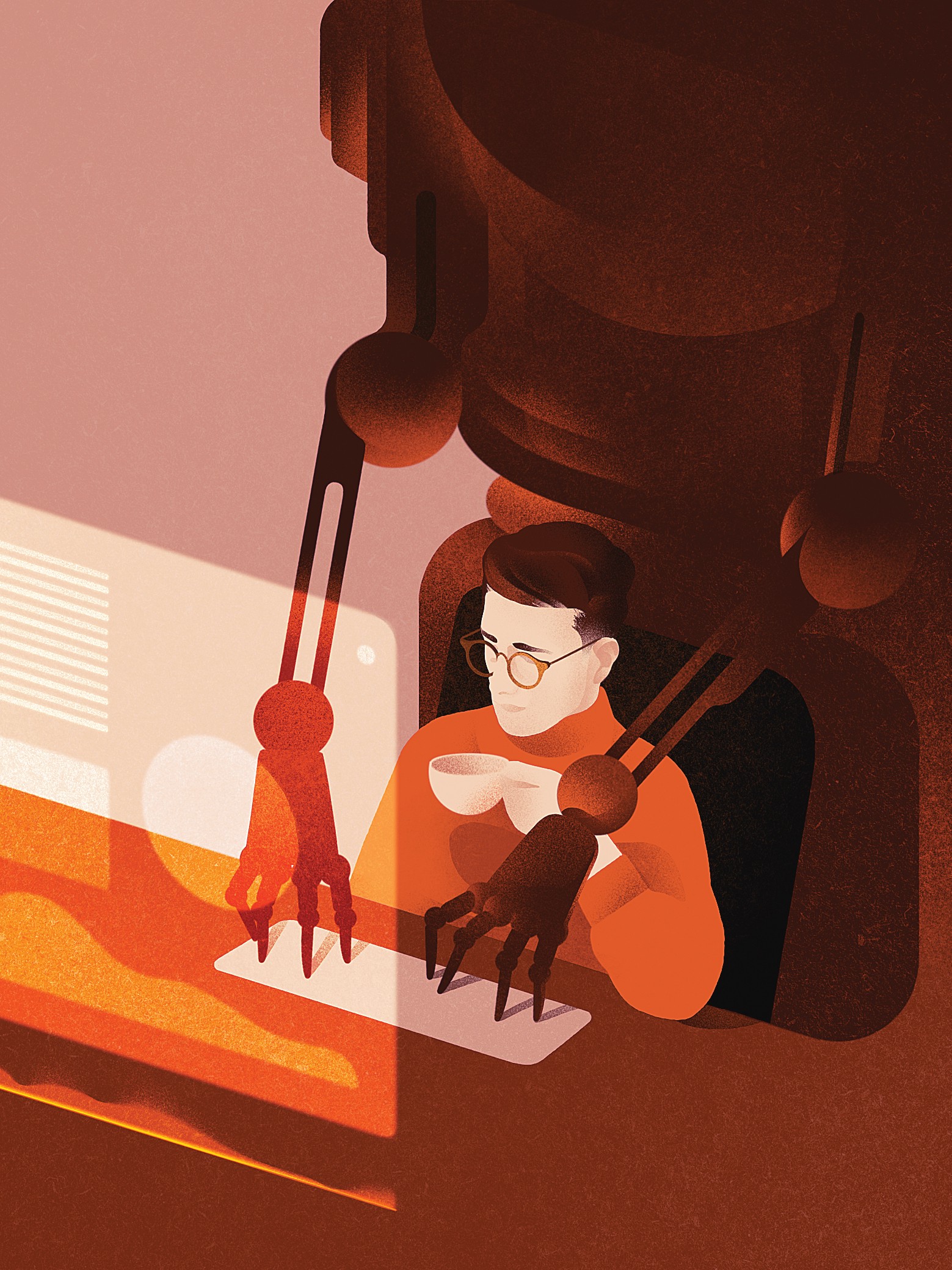 Since the dawn of computing, we’ve had a fascination with pitting humans against machines to see who’s faster, smarter, and more competent. On one hand we want to root for the computer to show the sophistication of what we’ve built, but on the other hand the idea of computers being more intelligent than humans is terrifying and the stuff of dystopian science fiction.

As far back as the 1950s scientists have been experimenting with computer intelligence. In 1956, scientists at Los Alamos Scientific Laboratory built a machine — MANIAC — and taught it how to play chess. It’s the first recorded human versus computer chess game where a computer defeated a human (though admittedly the user was a chess novice). Fast forward 40 years to 1996 where Deep Blue, a specialized chess-playing computer, defeated chess grandmaster Garry Kasparov. Word on the street is that Deep Blue made a seemingly random move about 44 moves in due to a software bug, which Kasparov wrongly attributed to “superior intelligence,” after which Kasparov experienced a decline in performance due to anxiety and ultimately lost the game (note: Kasparov rejects this interpretation).

February 10, 1996 was a big day for the artificial intelligence community, and I’d argue for humanity in general. After Deep Blue beat Kasparov, the idea that computers could actually be smarter than humans started to sink in. Abstract fears about jobs being automated away from humans suddenly got a lot more real. Huge advances in technology in the subsequent 20+ years only strengthened that idea, and while whole job-families are not being automated away, we rely on our AI-enabled technology assistants to help us with aspects of our lives that we wouldn’t have imagined even 10 years ago.

Technology Is Changing the Way We Work

Here at Outer Labs we build custom software tools that help building owners, architects, engineers, and generally anyone involved in designing and operating buildings. The tools we build differ from some of the big players in the AEC space in that we’re not just trying to make practitioners’ work more efficient. Oftentimes we’re encouraging them to think about how technology can fundamentally change the way they approach their work.

Back to chess for a moment. Human versus machine is not the only paradigm in the chess technology world. There’s another form of chess, often referred to as “advanced chess,” “cyborg chess,” or even “centaur chess,” in which a human pairs up with a computer chess program, and plays against another human/computer team. In this model, the human provides the brains — the strategy, and the computer provides the brawn — the ability to model and calculate millions of moves in seconds. It’s a complementary relationship where human chess players are endowed with chess superpowers — the ability to calculate millions of possible outcomes from a strategic move they might make. In a world that so often pits computers against humans, it’s a refreshing model that illustrates how I personally like to think of technology. It empowers humans to be the best they possibly can be.

There’s a broad spectrum of how technology can improve the process of designing and building buildings, ranging from small efficiency improvements all the way to a wholesale paradigm shift.

One of the most obvious things that architectural software can help with is automating mundane and repetitive tasks. Drawing bathroom or stair details is a great example of this. I have yet to meet a person who decided to devote many years of their life to attending architecture school so they could spend the first 1–2 years of their careers drawing bathroom details. It’s repetitive and tedious. Other tasks may not be as mundane, but they’re highly algorithmic or are based on clear rules or codes. Sizing HVAC equipment, as well as laying out pipes and ductwork are examples of this.

Architectural software can also help avoid mistakes and rework. If we can understand the spatial layout of things like columns and beams, we should be able to prevent the situation where a pipe runs through a beam, which happens all too often since different building systems are regularly modeled in isolation, and problems aren’t discovered until subcontractors are on-site installing the building system.

But architectural software can go far beyond automating mundane tasks. If we think of it like the paradigm of advanced chess, what could that mean for architecture?

Designing around Rules and Guidelines

Imagine a tool where instead of asking an architect to draw a physical form, we ask them to describe rules and guidelines for how they’d like a building to look and perform. The software then takes that ruleset and generates potentially millions of permutations. The hardest part here is actually writing and expressing these massing rules, but with the help of architectural subject matter experts, we strongly believe this can be done. Under the hood, a generative algorithm could power the tool, which if left to its own devices, would continue to generate form-after-form-after-form, 24 hours a day, seven days a week, tailored to a specific site, until told to stop. Beyond that, each form could be scored against a set of criteria provided by the architect. The results can be thought of as an ever-growing search space that the architect can navigate with the help of filters and priorities. Any of these forms can be taken as-is, or used as a starting point for further design and refinement.

In the old paradigm, an architect would iterate on a handful of ideas until time ran out, choosing a few promising options to bring forward. In this new paradigm, the architect provides the strategy — what to prioritize and what guidelines to follow — and the computer provides the brawn by generating many different options that follow that strategy, ranking each according to a set of priorities, and systematically evaluating and selecting the best fit.

Measuring Designs in a Repeatable Way

Interior space planning is another area in which a human practitioner could rely on her computer sidekick. Here, the complementary relationship between practitioner and computer could manifest as metrics related to how a building will perform for its occupants. There are many qualitative aspects of a space that make it a ‘good space’ for people: access to daylight and views, a certain level of vibrancy, and easy connectivity to the things that a person regularly accesses, just to mention a few. Until now, however, there hasn’t been a great way to measure these softer aspects of a space and judge whether that space is going to be successful for its occupants. By using geometric algorithms and simple simulations we can begin to quantify and measure these metrics in a repeatable way. Then, anytime a space planner makes a change to the interior layout, they can see how that change impacts these metrics.

Instead of having to guess or interpret how a space will perform, exposing repeatable metrics empowers practitioners to deeply understand the implications of design changes, and then focus their efforts on whatever area they feel is most valuable. The hardest part here is agreeing on how to measure these qualitative metrics, but like anything new, one must start with something, then iterate to make it better over time. The most important part is starting.

The last example I’ll provide where computers can give practitioners architectural superpowers is when there is enormous scale. Imagine you’re a large real estate owner — for example, the U.S. General Services Administration (GSA). According to their public records in 2020, the GSA maintains 8,681 buildings comprising 370 million square feet. If we estimate that the average floor plate is 50K square feet, that calculates to 7,400 different floors. Now, imagine you have to replan each of those 7,400 floors to account for physical distancing guidelines due to Covid-19. If each floor took four hours to replan, that equals 29,600 hours — equivalent to 740 40-hour work weeks, or 14.2 person years. Given the right rules and guidance, a software program can replan a floor in seconds, saving literally years of work.

The Partnership between Experts and Computers

Through my years of building software for the AEC space, I’ve encountered many people who are distrustful, or even fearful of new technology. There’s a fear that the role of an architect could be automated away as technology advances. I’d argue this is absolutely NOT the case, and that like advanced chess, a partnership between an architectural subject matter expert and a computer sidekick can unlock human potential and creativity like we’ve never seen before. As tempting as it is to view advanced technology as something that may eventually supplant the human touch, we are far, far away from that day, and it’s much more fruitful to explore the ways that we as humans can successfully collaborate computers to unlock our creativity and potential.

Jen Carlile is CTO and co-founder at Outer Labs. If you work in the AEC space and want to see how to harness these superpowers for your organization, let’s talk. Contact us at info@outerlabs.io.